skip to main | skip to sidebar

Wisdom the Albatross is 70 years old and having a baby

Not seen for 170 years found again in Borneo

Merry Christmas from our dancing birds 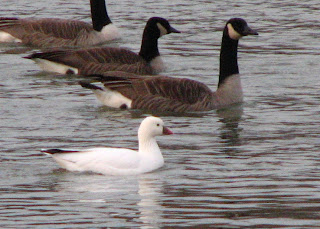 Posted by Cathy Carroll at 7:38 AM 0 comments

Proclaiming Ownership of the Hazelnut Bush

ABA article: Out Owling for Saw-whets

A couple of days ago a friend sent me an email that I nearly missed amongst all of the political spam that has been clogging my already heavily spammed email address to alert me to a November 4, 2020 ABA article in the Current section of their on-line journal that included a photo I took many years ago on Belle Isle.

Titled Out Owling for Saw-whets and written by Greg Neise, a Chicago birder and photographer, about Saw-whet owls, my photo is the first in the piece.  It's an extensive article that also includes vocalization recordings.

My photo in the piece is from years ago.  I have not been a good curator of my own photos and was unable to find this same photo in any of my own photo collections.  But, I did find one from January 3, 2009 in that same tangle.  I think the photo used in the article is from a later date, because the Saw-whet was found in the same tangle for at least two years in a row and possibly even three. 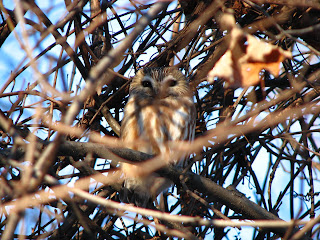 Posted by Cathy Carroll at 9:32 AM 0 comments

The World through a Lens

In 2010 I traveled to England for a two week visit with friends.  Joy and Cliff Young indulged my passions for travel, birding, photography and then later blogging about it all.  Cliff is also a landscape photographer.  They made amazing arrangements to visit a variety of spectacular places - one of which was coastal Wales.  We stayed at a hotel on a golf course with views of a spectacular bay from my room window.  To this day I think of this hotel stay as possibly the nicest I have ever experienced.

While in Wales the plan was to visit Skomer Island for close-up views and photos of nesting Altlanic puffins.  We all piled aboard a boat carrying perhaps 20-30 other passengers for our Skomer visit.  The cool sunny morning and the bright blue sea were amazing.  When we got to the island the seas were too rough to make the landing at the rocky docking area and we had to turn back.  Everyone on the boat was crestfallen, even though we had all been forewarned that this was a possibility.  I recall sitting across from a man with his approximately 7-8 year old daughter who had awakened at 4:00 am to make the boat launch.  This is what I wrote in my 07/10/2010 blog post:

"Because we wanted to get a good seat on the boat, we ended our rambling and walked to the boat launch to stand in line with a dad and his seven or eight year old daughter.  I gave my typical greeting, "Hi, how are you?" to which he replied, "Okay, I guess." He explained that he and his daughter had left their home in north Wales at 4:00 am to be assured a place on the boat for the Skomer Island landing.  It was right then that I perked out of my funk at not being able to land on the island. Everyone here today was just as disappointed as I was. What was I thinking?  Later, on the crowded boat, the little girl fell asleep resting against her father and with the hood of her pink jacket shielding her eyes from the bright sun.  At the time I didn't think of it, but now I wish I had got a photo."

When I re-read the paragraph above from this day I realize how much my photos and writing have changed from 2010 to now.  Now I would never have missed a photo of that child with her father.

As a consolation, it turned out that even the boat ride to and from Skomer Island was spectacular, and when we returned to the mainland we spent the day birding along the coastline.  As you can see below in my copied blog posts - also spectacular.

Another consolation prize was to visit Ramsey Island the next day. Both islands are included in the 10/12/2020 NYT article below.

Posted by Cathy Carroll at 9:14 AM 0 comments